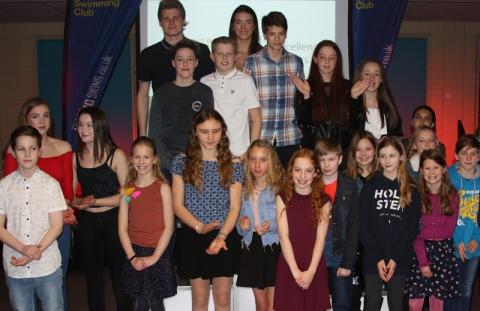 It was a tough gala as a big number of swimmers either were ill or were recovering from being ill.

Molly Colbert set a great example to the rest of the team mates and showed resiliance and maturity. Our club captain won with a stunning time in 200 free and 400 free and came second in 200 breastroke. Great swims!

Cade Barends smoothly made the 100 fly final where he dropped an amazing 9 seconds and there is still room for more! Kaelin Smith also improved over 5 seconds in 100 fly!
Callum Melville improved 200 breastroke by 11 seconds and Callum is now ranked 11th in Britain!
Well done to Connie Philips and over 6 seconds improvemant in 200 free.
Evie Turner was full of confidence this time - every swim was a massive personal best time. Evie shaved off stunning 8 seconds in 200 free, 18 seconds in 400 IM (25th fastest time in the British ranking!) and 10 seconds in 400 free. Excellent Evie!

Caitlin Anders bettered her 200 breastroke by over 6 seconds and now is just seconds off the Midland qualifying time! Martine Henderson also improved her time and is now chasing the same Midland Time as Caitlin.

Chloe Daybell also showed others how to swim BR by shaving off 6 seconds in 200 breastroke and being margins outside Midland time.

In 400 IM George Berwick (was not afraid to swim 400 free and 400 IM in the same day!) again bettered his time by over 7 seconds while Nicolas Breeze by 6 seconds and Billy Reed 5 seconds.

Congratulations to Chloe Hopkinson for qualifying for the first time for Midland Championships!