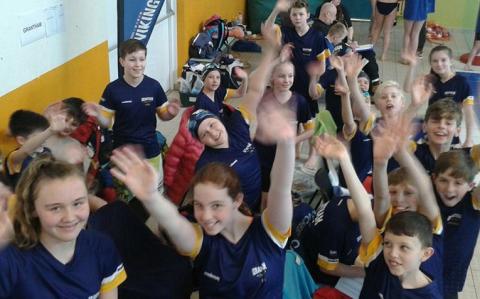 Callum Melville used the Grand Prix as the final test before the Scottish National Championships and he surely passed the test exceptionally well! Callum is currently fourth quickest in the club in 50 free and 16th in the British ranking thanks to his stunning improvement of nearly 2 seconds. It is also a new Grand Prix record. Callum’s 200 IM was also impressive! Callum dropped a great 9 seconds which puts him up to 7th place in Britain! Excellent!

Cade Deaves surely shows some great fitness. Cade is chasing Midland times and with 2 seconds PB in 50 free, 3 seconds in 50 breastroke and amazing 12 seconds PB in 200 IM this is a great sign before Cambridge!

In 200 IM Tom Berwick decided to swim fast . Very fast. Tom not only achieved an incredible 14 seconds personal best but also 4th fastest time in our County!
Edward Bellamy also swam very well in the 200 IM shaving off nearly 9 seconds, and Ethan Wright over 12 seconds! Great swims boys! Well done also to all of the swimmers who swam bravely this event for the first time. Thomas Thornton achieved a time which puts him 5th in the County, Oliver Bailey was just a finger tip behind and is now 6th, Logan Melville is 7th. Well done also to Elijah Halliday and William Gray for very their solid times!

In 100 IM our youngest boys showed they can swim all 4 strokes well. Max Kowalski with a new PB by over 10 seconds is now 5th fastest in the County and James Nichols, improving by a whooping 16 seconds is now 2nd. Zach Hopkinson was swimming well and shaved off a respectful 6 seconds!

In the 9-10 year old girls 200 free Grace Turner was the quickest with a new PB by over 3 seconds. Ava Reed must be doing something right in training because her time dropped by a stunning 16 seconds. Sophie Leveridge improved by anamazing 12 seconds, Alex Theobald by 32 seconds (!!!!), Cora Farley by 22 seconds (the quickest time in the County) and Millie Bailey also by 22 seconds (third fastest time in the County). Congratulations for brave swims to Orla Connery, Elena Aldenhoff-Kelly, Hannah Dobney, Harriet Monaghan and Jessica McMahon.

In 50 butterfly nobody was close to Connie Philips who broke the Grand Prix record, but Chloe Hopkinson swam fast enough to secure another Midland time in this event.

Other great swims in 50 butterfly: Chloe Daybell (2 sec off), Grace Davies (whooping 10 sec off), Ava Reed (2 sec off), Emily Buck (nearly 4 sec off), Alex Theobald (3 sec off) and Cora Farley (nearly 5 second off and the fastest time in the County!).

In 50 backstroke Evie Turner claimed the first place, with Connie Philips close behind, improving by over a second and securing second place in the County ranking.

After 2 rounds we have plenty of swimmers in the top 6. Callum Melville moved up to the third spot in 12 years Age Group , Cade Deaves is fourth, Vadims Molcanovs is fifth and Billy Reed (unable to do the second round) is sixth. Among girls it is Chloe Hopkinson who is in the lead, Connie Philips is third and Chloe Daybell is fourth.

In the 11 years Age Group Samuel Leveridge is a confident leader, while among the girls only Alex Hallam-Stott is currently in the top 6, and is in the sixth position.

In our youngest category Max Kowalski is first and James Nichols is sixth.
Well done!

Now it is time to train harder than swimmers from other clubs and move up in the Grand Prix standings!